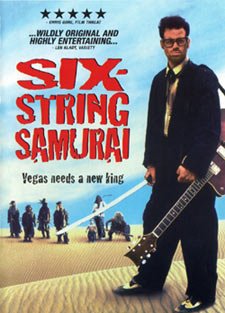 Damaged 2.0 uploaded the soundtrack to Six String Samaurai to rapidshare. Do yourself a favor and grab it here.

It doesn’t matter if you’ve never seen the movie. In fact, I think you’re better off just listening to the soundtrack. It’s a rocking journey of Kick-Ass about an alternative timeline where the Commies dropped nukes on America and Elvis became the King of Las Vegas. Sadly, the King is dead and now new rockers are on their way to Vegas to become the new King. Death stalks the land, slaying rockers and stealing their guitar picks. Vegas’ only hope is in a tall, thick glasses wearing, sword weilding, guitar playing loner named Buddy.

What impresses me about the soundtrack is it almost does a better job than the movie of telling the story. Performed by the Red Elvis’s and Brian Tyler, the album crafts a world where 50’s rock and roll will just not lie down and die. It’s an album where Richie Valens and Khrushchev would have guitar solos. You don’t need to see the movie to feel the kinetic energy of a music style that relied on guitar skill to convey a point instead of just volume.

The album is one of those pieces of art that hijacks your mind and doesn’t let go. I find myself fascinated by it because that’s exactly what I want to do with my stories. I think I need to work a lot harder.