Just so you know, the porn video entitled “shons3sum.avi” that is floating around on several bit torrent sharing sites is not actually me. It’s a fake Z-list celebrity sex video. Well, the sex is real, its just Shon is not real. Well, I’m real, it’s just that the guy in the video is not really me despite he ways he yells “Erotiterror Forever Baby!” while he fucks the two really hot women in that video. Also ignore the fact that he is wearing ‘Pirate Booty’ boxers just like the one I have. That’s just a total coincidence. Finally, ignore the way he often says, “I can’t wait to blog this,” because quite frankly, I do say that a lot during sex, just rarely out loud.

So please, do not download this fake video. If I ever release a sex tape, it’ll be advertised on this blog. Please send your audition photos and tapes to my e-mail address if you are interested in being in this future sex scandal video.

Also, these are not my toes. Even if they were my toes, the woman who painted them wasn’t wearing pants at the time and I could see right down her shirt, so there would be no shame in having toes painted like this, if toes like these were actually mine. And it was doing someone a favor, if such toes did belong to me. Which they don’t. 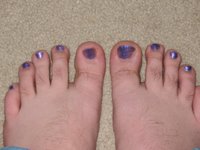