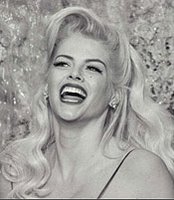 Most people understand the concept of an alpha dog. Dog packs, monkeys and just about any animal that is social has an alpha which is often the biggest, strongest and healthiest member of the pack. They rule their pack while fending off challenges from those who wish to take their place.

What is less known is the concept of an omega. The omega in a pack is at the bottom of the chain. These poor creatures are the ones every one else picks on, bullies and bosses around. They exist to bear the abuse of their group.

Here’s the part that fascinates me- They hold no power yet when an omega dies, the pack stands a real chance of falling apart. An alpha can die and a wolf pack will mourn for an hour and then chose a new leader. When an omega dies, packs have been known to mourn for weeks, sometimes never really recovering.

Vickie Lynn Marshall, better known to her pack as Anna Nicole Smith, passed away yesterday. She started off as a gorgeous model who came across like Marilyn Monroe 2.0. Her breasts were bigger, her hair was more fabulous and her attitude was so adorably pornographic. She was at the start of a more voluptuous look as opposed to the heroin chic of the 80’s. Visually she was divine. 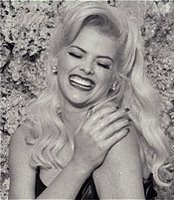 In this Internet reality 24/7 entertainment channel age though, that wasn’t enough. Her every action amplified for consumption, it didn’t take Anna long to become the omega for our society. She committed the crime of marrying a terribly older and wealthier man. She gained weight beyond our national comfort zone. She was also a little less divine than we wished her to be, so every dumb silly thing she did was an excuse to get in another jab and another insult. She went from alpha to omega and people preferred her that way.

I wonder sometimes how Anna felt. Her reality show was clearly her cashing in on her omega status. By turning her life into weekly entertainment, she gave her consent for society to abuse her. Those who couldn’t bring themselves to humiliate her could console themselves with the myth that Anna was getting paid so it was okay. My friends would quote her latest embarrassing statement followed by a ‘bless her heart’, as if that single statement absolved everyone involved from verbally pissing on her. Anna must have known what she had become and I wonder if she knew how important her role was.

Anna’s dead now. Cause of death is currently unknown which means her pack will have to figure out what is the most hurtful humiliating cause they can settle on. She was society’s omega and even in death they will find a way to put her down for their own enjoyment. In the years to come, entertainment shows and alleged news programs will drag her body, name and image around for community gangbangs. 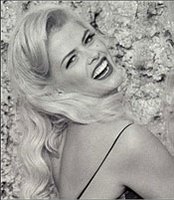 Deep down though, I hope the whole damn pack dies with grief.

5 Responses to “Rest In Peace Vickie”