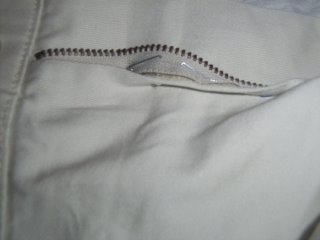 Rather than drive to downtown Atlanta we took the public transit system. We drove down to the train station and parked for the day. We had just bought a disposable camera and were ready to go off to fun. As I got out of the car, the wife noticed something. My shorts zipper had been ripped free. Every time I took a step, my crotch was flashed to everyone.

Well, the wife had no safety pins, needles or any other sewing tools. We’re standing there at the train station wondering what the hell we’re going to do with my flashing crotch. We were running a little late and didn’t have time to go back home and get new shorts. Fuck.

That is when we noticed the Office Depot across the street. They didn’t have safety pins, but they did have staplers. That is why we were outside the train station with my wife kneeling before me, stapling my crotch together.

Life is weirder than fiction.

We got to Dragon*Con and as soon as we step off the train, we get behind a woman in a short goth punk outfit who’s red panties kept flashing us. I snagged a gal that was dressed like Red Sonja and took her picture. Actually I asked a lot of pretty girls if I could take their picture and let me tell you something. Those women just lit up every time I asked them. They were so happy that someone wanted to take a piece of them home so to speak. I started taking pictures of less than attractive people just to watch their faces light up. I don’t know if I am super nice, or just enjoy being able to make someone’s mood change with a simple request.

My first brush with celebrity was Peter David. All my poise, calm and coolness just melted in the face of a writer I respected. I started stuttering, and at one point stared at him and admitted I was stumped for anything else to say. It was hilarious in a humiliating way. I managed out some compliments and made my escape.

We attended a panel hosted by Paul Dini and Misty Lee. These two were so funny, and so much in love with each other, you just can’t help but adore them. They have a running joke that has somehow morphed into its own downloaded show that is now eclipsing both their careers in popularity. It was neat to listen to them describe in amazement how a silly joke has morphed into a possible television deal.

I did not see Phil Foglio anywhere which miffed me till I ran into Rich Larson. The guy was sitting all by himself and I looked around thinking, ‘why isn’t this guy mobbed?’. He timidly said hello to me and our mutual anxiety issues seemed to mesh together. He was doing sketch requests for 30$ which is a lot like finding out Emeril is willing to make dinner. I paid the guy and asked for a pirate female captain, and will check back with him tomorrow. The funny thing is, he asked me if I wanted anything in specific, or had photo refrences or whatnot, or he could just make something up. I looked at him and said, “You do it the way you think it should be” and he just gave me the biggest smile.

So far our swag list of loot comes down to-

A stuffed Griffon for the wife- 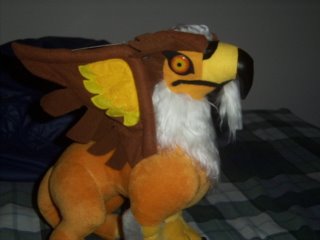 A copy of Shadowrun ‘Street Magic’.

And this lovely witch that I picked up for 12 bucks. Sigh. 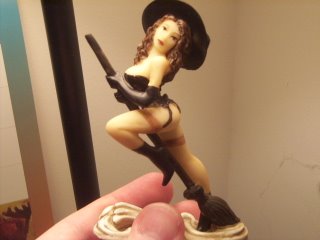 Let me tell you about a weird moment that made my day. One of my favorite characters in comics is Powergirl. She’s busty, but also is a tomboy. She was the brassy Supergirl, ready to punch someone out for staring at her chest for too long. Yes she’s overtly sexual looking, but there was always something playful and tough about her too.

Well I ran into a fan who was dressed like Powergirl and my heart went a flutter. I asked if I could have my picture taken with her, as opposed to just taking a picture of her and she happily agreed. She then asked if she could do a sexy pose where she leans in for a kiss. I think I blushed ten shades of red. I could feel my cheeks burn. I know that Powergirl isn’t a real character, but having her be so perky and happy to pose with me made me feel like the prettiest girl in the world just went down on me. Or something.

Tomorrow we will watch the parade, and catch more panels. And I will do my best to take a lot more pictures of dressed up women.