Dragon*Con has a parade every year where people dress up and walk in the parade. If you have a costume, you are in the parade. We really really wanted to see it this year. MARTA, the Atlanta transit system however hates us. The trains was late getting to us and late leaving. We got to Dragon*Con late and realized the parade was almost over. What worked out for us though was that the food mall was empty. Completely utterly and totally empty. It was bliss. We had our pick of stores and had a quiet brunch. Right when we were done eating, the parade folks poured into the food court and we had an impromptu parade of costumed beauties. It was bizarre to see a stream of Jedi’s, Goth girls and Stargate people pass by the Subway and Fuji Express.

Having missed the parade, we ducked into the Art Gallery. This is where artists and sculptors show off their work in a gallery that will kill your ass if you bring a camera. We meant to just duck in but we ended up spending three hours there. Oops. What kept us there was that so many of the artists just didn’t have anyone there. The artists were bored and when you got near their booth, they got this eager orphan look like they prayed you were there to take them home.

Having one on one time with someone like Ragnor just blew my mind. He told us about the trials of doing the art for Evil Genius and how they ultimately butchered his work. When I told him he was better than videogame art he laughed and said “But they pay so much money.”

Another person I spend too much time with was Luke Eldrigde. His sculptures really moved me. Using only wire, he creatures figures that flow with kinetic energy. He showed me how he makes the frame and just spends hours wrapping them with more wire. He showed off how he uses copper and yellow wire to create red hair with highlights. He is so excited about his work and I just stood there soaking it in. he had an angel that was glorious and had three male figures dangling from her looking so desperately like men trying to touch beauty. I hate to be gushing, but it just changed me looking at his work. He had captured yearning and made it look dynamic.

We saw many awesome things in the Art Gallery and talked to many wonderful artists. Their passion was infectious. I wanted to rush home and write and create and get elbow deep in the wonder of creation.

We attended another Paul Dini panel and listened to his stories in the world of animation. We also saw his wife Misty Lee like six times today. It was getting creepy. I kept worrying that she would think we was stalking her. One time, Misty Lee just cut the wife off and my wife yelled to me “Did Misty Lee just run me over?” and Misty Lee looked at us and I saw the flash of I’m-being-stalked recognition.

At Dragon*Con they had a life size Jabba the Hut set up. The Leia’s Metal Bikini group was there with 30 Leia’s. We snapped some photos and then the wife went to go to the restroom. A cute gal saw my Invader Zim shirt and started flirting with me. Me, the wife and the lady who’s name I never caught talked for an hour and a half about gaming, movies and costumes. Once we realized we lived across country from one another, we just relaxed and talked forever. It was one of those strange fandom in the night meetings that was fun and maybe more fun that we will never see each other again. We vented, talked and laughed.

The wife and I shopped and talked to the lead retailer and had two memorable incidents. One, she asked who was the Hitter in the family and we said we both were. It confused her and she asked how the hell we did things. When we mentioned we had playmates outside the marriage, the look on her face like the Goth schoolgirls avoiding the paddles. Kink is cool, poly was weird.

Then later she asked about our other relationships. The wife said she was between submissives right now, I said I was between Drama right now. The male retailer laughed and shook my hand for that statement but the woman just glared at me. Sigh. Making friends can be hard.

We stumbled home from Dragon*Con today sorer than yesterday. I can’t even imagine going for two more days. But then I remember the gorgeous Aeon Flux I saw today, the cute girl who flirted with me for an hour and the amazing artists I met today. I think I can summon one more day.

The loot count for today- 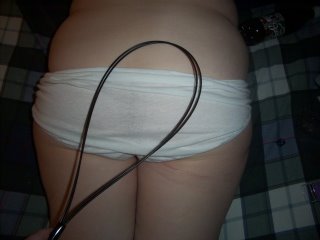 An artbook by Rangar

Book 5 of XXXenophile by Phil Foglio

A six dollar d20 made of pure quartz.

A pair of Safety Scissors 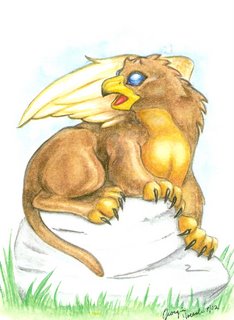 Oh, and Larson’s pirate captain for me. Mere words can not express how lovely this picture is in it’s full framable glory. 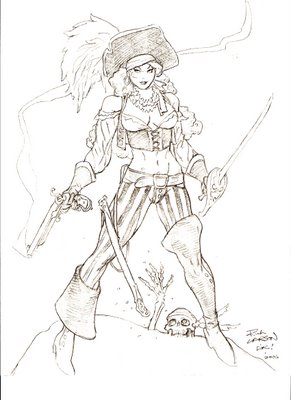 3 Responses to “Dragon*Con Day Three: More Than Meets The Eye”