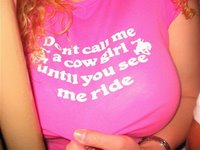 Sometimes my libido goes into strange base directions. Although I do often fall for strong females and develop mad lusty crushes, there are times when my cock and mind want something a little less of a person and more of an Idea.

This week I have had a hankering for some cowgirl fucking. I’m talking full blown Rodeo attire complete with their own rope. At first I thought I just had a craving for a Western fetish. I thought I could jack off a few times and be done with it but that hasn’t been the case. As soon as I take my cock in hand, my fantasies become complicated and hung up on the strangest details.

For one thing, she’s got to have hair. It’s got to be big long luscious hair like a horse’s mane. It can be in a braid and bouncing behind her back but it’s got to be out there flying in the wind. Without the hair, a cowgirl is just a cowboy.

She has to have boots. The boots have to be tough enough to kick a rustler in the nads but sexy enough that you want them resting on your shoulders. They can be as fancy as you like with designs and patterns up and down the side but they got to be real leather. If they’re caked in dirt, that’s what we call bona fide.

Jeans are nice and Goddess knows, I do love a women in blue jeans but if you’re going to be a cowgirl then why not wear some chaps? Give me a nice open ass I can smack or grab while the rest of the legs are sheathed in leather. They’re like jeans you can wear while fucking.

The top depends on the mood. I’m fond of an open vest that covers the breasts but is easily parted. Or you can go with a tight gingham shit that squeezes the tits together so tightly the top buttons are bursting open from the boob-rush about to spill forth. Those buttons are important. Buttons make promises.

Back before country music was about dickheads, back before people threatened the Dixie Chicks for being uppity, back before Texas became another word for crazy redneck Christain pride, back before Jessica Simpson, the cowboy was a symbol of America. Cowboys went into the West and wrestled the land from nature while riding one of nature’s finest creatures, the horse. Cowboys sang songs and fought train robbers and had gunfights over honor land rights. Well, the fictional ones did. The real ones killed Native Americans, slaughtered the buffalo and did some nasty atrocities. That’s a very important distinction and it’s not the real cowgirls I want to wrangle.

See, I’m still harboring a crush on the cowgirls of my youth. No one is a bigger fan of ‘Deadwood’ than me but I long for the days of naivety when a Cowgirl was just a really spunky tomgirl with nicer hair who liked boys. I want to fuck the smiling busty cowgirl with a nice tan who existed only in pinball machines, TV westerns and pulp novels. I want to fuck the rough and rowdy girlfriend who carried her own gun. I want to give the rodeo Queen something really large to ride. I want to go back in time and look at a girl wearing a cowgirl hat and not worry that she probably thinks evolution was a communist plot.

I want to fuck a cowgirl. I want to ride and be ridden by an outdoors gal. I want to have nasty wild sex with an American Amazon.

And the cowgirl hat has to stay on. 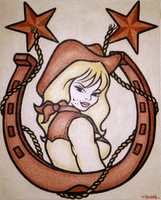 7 Responses to “I Want to Fuck A Cowgirl”