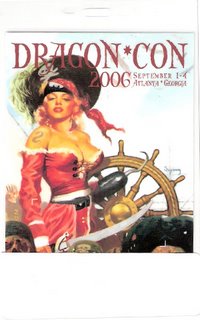 I was anxious all day because of bills, wife fights and general esteem issues. The wife got off work late and wouldn’t use the directions I had printed out because “I know the area”. We got lost and I’m watching the deadline to pre-register slip away. This doesn’t help my anxiety.

Then we turn a corner and behold! A huge crowd of long haired geeks wearing black t-shirts in the middle of August thronged about. We paid seven bucks to park and went into the hotel.

It was about now that I kicked myself for not bringing my camera. Coming down the stairs was a beautiful Leelo from “5th Element” with orange hair and pure white strips of cloth covering her delicious bits. She was the first costumed person we saw and she was a hottie.

My anxiety just slipped away. These were my people. These were the people that I rub shoulders with in crowded gaming stores. These are the people that are standing in line to see Lord of the Rings. These were geeks who will cut you if you disagree with them about their favorite Star Trek captain. Even more so than hanging out with kinky fetish people, I felt like a sense of community with these folks. This was our time and it was going to rock.

My wife weirdly enough seemed to take on my anxiety. Maybe her office job has made her forget what real geeks look like. She was nervous and unsure of herself. I on the other hand was walking straight up to strangers and asking them if they knew where to pre-register. I asked a pirate if I could see his tattoos.

I had no fear and Goddess help me, I forgot what that felt like. I want to be like this all the time.

Wish me luck tomorrow. I’m going to try to catch a magic act and hopefully find a few pirate clothes that fit. I’ll also be sorely upset if I don’t get my picture taken with a sexy pirate gal or two.

4 Responses to “Dragon*Con Day One: From the Four Corners of the Globe . . .”