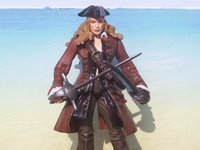 If I had a gold doubloon for every time a person asked me that, I’d have a treasure chest worthy of burying on some secret shore. To me, it is a silly question. A better question is why don’t we all love pirates every waking moment?

As with most things, I started young. I was four when a movie called “Star Wars” came out, and even as a kid, I recognized how awesome it was that Han Solo had his own ship. The Millennium Falcon was tricked out with cool guns, a place for smuggling stuff and its own holographic chess game. As a young boy who left his small hometown only once every other year, I found the idea of a cool ship that could take you to faraway places to be pure magic.

So as I grew up, I always favored stories with ships. Jason and the Argonauts, Sinbad, Flash Gordon and Star Trek were all great, and to me they were all possible because they had ships. Spaceships, sailing ships or even black vans with a red stripe were all plot devices to me. They enabled the adventure, and there was nothing more I wanted than my own ship. I wanted adventures, and more important, I wanted to travel there.

So, as you can imagine, I took to pirates any time they appeared. It wasn’t ’til my teenage years, though, that I really developed a fondness for them. I have always been a sexual person, and I have often been frustrated by what I perceive to be a lack of sexual excitement in my friends. I always feel like the pervert in any group I am in, and it has made me feel like an outcast over the years.

Toss in the fact that I am a geeky nerd, and I feel more outcast.

When I became interested in domination, I felt ten times the outcast.

When my wife and I became poly, even kinky people looked at us funny.

And writing erotica as a hobby does not make for easy casual party conversation.

I’m not saying that I’m better than anyone else or that I feel so far removed from other people that no one is like me. What I do feel, though, is that society as a whole disapproves of me. I know there are people further out there than I, but I feel in general that I would not be accepted by the average person on the street. I’m OK with that, but man, does it make me hungry to find people more like me.

And in that way, I feel a lot of sympathy for pirates. In a lot of pirate fiction, pirates are the ones having the fun. What defines pirates is often their adversarial relationship with society. They have no nation to back them up, they are looked down upon by polite society and they often fall prey to other pirates who are greedy for their loot. I have read a lot of historical accounts of pirates, and I know that real pirates were often pure scum, but deep down, I admire people who decided to fly their own flag and take on the world for their own personal interests.

And here is the part that really gets me: These outcasts, these people with no nation or port to call their own, they somehow manage to find enough people just like themselves to crew a ship. Not only that, they create their own rules and elect a captain. These men who cannot function with their fellow man somehow manage to find a way to create their own rules with kindred spirits.

As a geek, I totally understand that.

As a kinky person, I totally understand that.

As a poly person, I practice that.

And as an erotica writer, I feel that way with my readers and other writers.

8 Responses to “Why Pirates?”