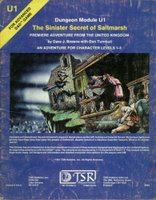 Let me explain something about how teenagers play Dungeons and Dragons. They are less heroic righters of wrongs and more like exterminators of anything that moves in an unending quest to convert monster and villains into gold and treasure. Fourteen year old Shon knew twelve different tactics for killing a dragon and exactly zero methods for befriending a strange new creature that might be friendly. Dungeons and Dragons now stresses role-playing and creating interesting personal interactions but back in the 80’s, it taught us to explore, kill and loot in that order. You know, we would have made kick ass Conquistadores or Halliburton employees.

In Dungeons and Dragons most of our adventures were home made. Someone would play the Dungeon Master and create a maze on graph paper that we the players would explore and slaughter. Orcs viciously defended ten feet by thirty feet rooms with doors that were placed symmetrically on the map. We became adepts at cleaning out these unnatural caves that had right angles and ten by ten corridors.

However there were also Dungeons that we could buy that were designed by well, adults. They were called Modules, and we loved playing them because they contained weird wacky stuff like plots and creatures that we had never seen before that needed to be killed. One of these Modules as you may have guessed by now, took place on a freaking Pirate Ship.

‘Sinister Secret of Salt Marsh’ is about a not really haunted house that is home to some pirate smugglers. The first half of the module is dull as spit but once you realize there are pirates and you find out where their ship is, holy fuck does it get exciting. 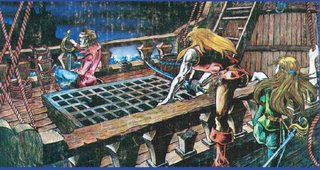 From the moment we snuck on board the ship, my brain started to look at the whole adventure differently. We’re weren’t breaking into another dungeon, we were boarding a ship and we were fighting hard cruel men who made a living of well, invading other ships and taking what they wanted. It made me question how we played, and what our motives were. We assumed we were the heroes, but we would slaughter any monster for a gold piece. Sure, we called ourselves knights, wizards and rogues but it struck me that there was very little moral difference between us and pirates.

Except these guys had a home. It was called a ship and man, I was jealous.

Look at all the cool places on this ship,

A crow’s nest for being really high up. 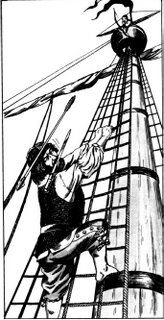 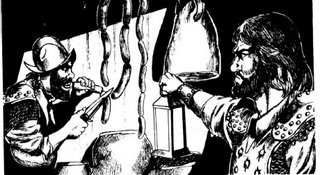 A very spacious Captain’s quarters where you don’t have to make up your bed.

I have talked before about how crappy my home life was as a teenager. Role-playing games were my escape from the constant humiliation and insecurity I was dealing with. Dungeons and Dragons let me get out my aggression but once I saw this pirate ship, I wanted more out of my games. I wanted a home to replace the crappy one I had. I wanted a place that would serve as my home and my vehicle for having adventures far away from the mundane of where I lived. As we wiped out the pirates, I couldn’t shake the feeling that these guys were living a better life than I was. I also felt as a nerd and a someone with little social skills, that pirates were just as much outcasts as I was.

And then we found a brig with a naked elf are chained to the floor. 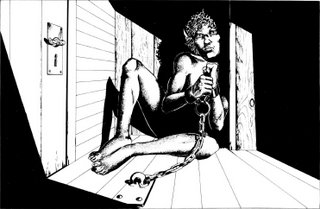 Let’s talk about the naked chained elf. Frequently in Dungeons and Dragons we run across prisoners whom we free, take home and their happy families reward us with money. Usually these prisoners are locked away like the treasure they are. This guy was naked, probably because the module was written in the United Kingdom where they are less puritanical than us. But I distinctly remember thinking, why the hell did pirates have a naked elf chained in the brig?

“I want my own naked elf to lock up. And I want her to be a woman.”

I was a smidge disturbed by that thought. I knew then that I was identifying with the pirates and I was a little jealous of the pirates because they had a cool ship and a home. I was already thinking of how cool it would be if we started playing Pirates and took our effective Kill and Loot methods to the high seas. But when we ran across a chained up naked person, I couldn’t help putting myself in the Pirates’ place and thinking, “Who would I chain up in own pirate brig? What would I do with them once they were there?” As a kid I was a little freaked. These pirates were the bad guys and here I am wishing really hard that I could be them and have my own prisoners to chain up.

Twenty years later, I still have fantasies about who I want chained up in my pirate ship. My fantasies are far more consensual now and I am much more comfortable with them. I have my own home now with a place to chain naked women up but I still think fondly of that impossible ideal of a ship that takes you to new adventures where you live your own lifestyle in spite of what society expects of you. And of course, plenty of places to tie up naked women. I’m not a pirate and I don’t say ‘arrrggg’, but I will never forget that my first BDSM lust was sitting around playing Dungeons and Dragons on board a pirate ship.