Every couple hundred weeks or so, the stars align and cosmic forces work together to give me a mind blowing weekend that makes me wonder if it even happened. It would take me a week to blog it all and another month to process how it has inspired me or changed how I view things. The hardest part is that I am not terribly sure it happened at all. Some of it just seems too outlandish.

I mean, did Confederate soldiers really get together at Stone Mountain to defend a water park from Union forces?

Did I really sit in hot Georgia weather onboard a train to listen to a group of plucky college kids lip sync every freaking song that ever had the word train in it?

Did I really see a giant carving of Confederate generals on the side of a granite mountain? 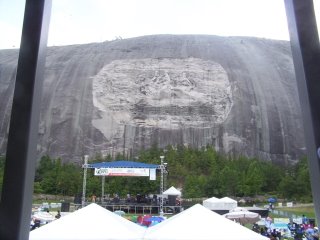 Hmm, at least I have a photograph for that.

Did I really kick my wife’s ass in miniature Stone Mountain golf? Why does a Civil War site have miniature golf?

Did the restaurant we went to with Possible Spanking Friend really have nude paintings of aliens? That seems too bohemian even for Atlanta.

Was those Rice Balls the best damn rice balls I had ever have?

Was Possible Spanking Friend telling the truth when she said she had never been to a sex store before? And did we go to two to break that virginity and shop for a butt plug for her?

And did we really spend over two hours at one store talking to a vampire professional Domme about spanking, identity issues, parallel universes and H.P. Lovecraft?

Did I really say, ‘I love you’ to the Domme when she mentioned H.P. Lovecraft?

Was the rain Saturday Night as apocalyptic and violent as I remember it?

Did I really spend an hour or two trying out different knots on Possible Spanking Friend’s wrists?

Did I really grab Possible Spanking Friend by the hair and hand spank her ass? Does this mean she needs a new alias? I like Sara.

Did eat spelt bread and actually enjoy it?

Did we really watch that many episodes of ‘While You Were Out’?

Did my wife really ask me in the grocery store why I never grab her ass in public?

Have I never done that before?

Did I re-write chapter 11 of Cell Phone slave in one three hour sitting?

Was it half as good as I think it was.

Did I really manage to get the soundtracks to both ‘Kung-Fu Hustle’ and ‘Shaolin Soccer’?

See, I’m still not sure all that really happened.