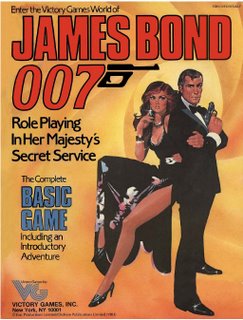 Today Secret Geek Sunday is cranking back the Way-Back machine and going into the strange time known as the 1980’s. It was a weird time. See, there was these evil Russians who umm, did Russian things and we needed to stop them. Other than waiting for the Russians to attack us in our American heartland like they did in Red Dawn, we would often fight evil Russians with secret agents. Our agents would go in, seduce any sexy Russians and kill all the evil male Russians. It was just what you did in the 80’s.

As a teenage boy with raging hormones, I did my part by playing the James Bond role-playing game created by Victory Games Inc.

In the James Bond Role-playing game, you created a M.I.6 agent and kicked foreign ass. Sure, you were British, but you spoke English so you were still cool. If anything, you were cooler because you had an accent. To a kid who was living in Jacksonville, North Carolina, the idea of foreign travel, exotic women and strange enemies seemed like fantasy land. I could either hang out at the mall and pray that Sherrie F would ever notice me, or I could sit around with a few friends and blow the shit out of an underwater base located right off of Tokyo.

Before I say anything else, I just want to share a moment with you. Check out the character sheet every player gets. 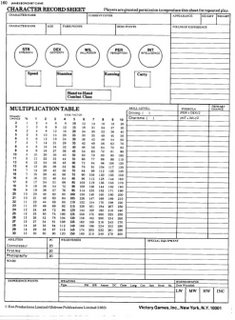 See that right in the middle? A multiplication table! That’s the kind of hardcore math that was involved in every game. Cripes! No wonder Sherrie never paid attention to me. I was crunching numbers like a mother fucker trying to figure out my success rate of kicking Jaws in the jimmies instead of mastering more important skills like how to properly part my hair without looking like a 14 year old with a comb-over.

Anyhoo, Bond was a fun game. If this was a role-playing blog, I would take a moment and explain how the Car Chase system was so perfect in recreating James Bond movie chases that I use a similar version in role-playing games I play now. I would do that, but let’s be honest. In Bond, it was all about the sex. If characters like Pussy Galore and Anya Amasova did not exist, I doubt I would have even played the game.

The James Bond Role-Playing game had a system for Seduction. Check it out here. 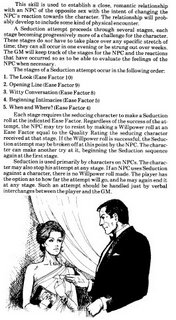 This my friends, is math teenager geek Nirvana. The complex interactions of men, women and sex is broken down to five easy dice rolls. Holy crap! They didn’t teach this in sex education.

First, there is The Look. I can personally attest that this worked on Sherrie as every time I gave her the The Look, I definitely got her attention. Mostly it was a wrinkling of her eyebrows, like she was confused.

Second, there is The Opening Line. I think I botched this as my opening line was, “Hey.”

Third there is Witty Conversation. I know I failed this because I brought up how much I didn’t like our English teacher, who apparently was a friend of Sherrie’s mother and had taught Sherrie how to ride a bike.

Fifth is When and Where? Yeah. Bond was a classy game about classy people.

There was also an entire chapter on gambling, another chapter on weapons and a long chapter about foreign cities. As you can imagine, I didn’t much attention to those chapters. After being rejected by Sherrie, I threw myself back into the shadowy world of James Bond where I melted the cold hearts of beautiful Russian women. And Japanese women. And a shitload of sexy African women. Well, you get the idea. Real Shon might have struck out but Secret Agent Shon was getting more action than that final number on that multiplication chart.

It’s really amazing I ever get laid now when you think about it.