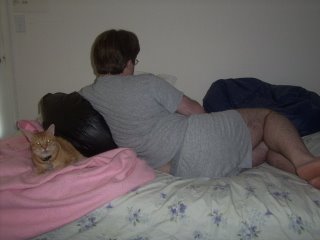 That’s no bed, that’s my couch.

When my wife and I moved to Atlanta, we left a lot of our furniture behind. It was too expensive to pack it all and we had planned to buy all new cool furniture once we got here. The problem is that getting here cost us a fortune and we went into debt doing it. Factor in a car wreck, a blown knee and other setbacks and you end up an apartment that looks a lot like a college freshman’s room.

We had two beds because being poly people, you need two beds. We turned the queen size into the living room couch. It works pretty well. Throw in two bean bags and you get into almost any position to watch television. Well, and do other things.

What fascinates me most about having a bed for a couch is how our guests use it. Some of the most wild carefree people in Atlanta will sit on it like it actually is a couch. They will sit up straight and you can see their toes point down as they try to touch the ground. On the other hand, the most judgmental stuffy person I met in Atlanta sprawled out on the couch and kept dangling her shoes from her foot. Every time she shifted it was some new sexy pose. Something about a bed just relaxes certain people.

That’s my other cat, Sam. To him the couch is just another kingdom in his domain.