It was the week before the 4th grade started. As far as I was concerned, the most horrible thing that ever happened to me was happening now. I was getting glasses. Even as a small child I knew that glasses meant I was a nerd and something to be picked on. I loved going to school but for the first time I was dreading it. I was a semi popular kid. I had friends. My young mind knew that I could not have these things with glasses.

The 4th grade started and most of my predictions were right. I was always a smart kid, but now I was the smart kid with glasses, which made me Encyclopedia Brown now. I didn’t really like sports except dodge ball and freeze tag but now I was the kid with glasses who sucked at sports. Teachers treated me differently which was really weird. They treated me as fragile and smart which just fucked with me more.

The only thing that saved me was Kimberly. She was a plucky tomboy just as smart as me and a wee bit tougher but man, she adored me and I adored her. She picked me and stuck by me all school year long. We were as much a couple as fourth graders can be and though we never kissed, we didn’t have to. Sharing her ice cream was more than enough.

So that’s why I never looked at my glasses as a drawback. I got my first girlfriend AFTER I got glasses. Yeah I know I was only 10 but these things matter to a guy. Glasses are just a part of me now and quite frankly, I think they still make me look a smidge smart than I am.

In a weird way, glasses have become my fetish. I relate to people with glasses and make the false assumption that they are smarter than they are too. Glasses on any woman make them look better in mind. I have had submissives who on glasses only for reading and when they really want me to ravish them, they know to wear their glasses. I am that easy when it comes to glasses.

So here’s a picture of my glasses. They help me read. They help me do just about anything cause I am blind without them. They also make me look sexier and for that alone, they get their own HNT. 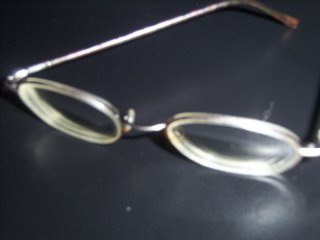 20 Responses to “Half Nekked Thursday Glasses”