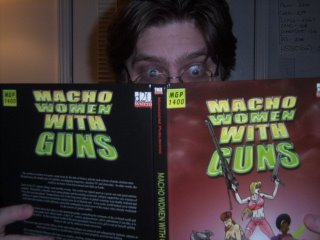 ‘Macho Women With Guns’ is an interesting role-playing game phenomenon. In the late 80’s role-playing games were pretty sexless and dull as far as content went, but their covers were pretty outrageous. Dangerous women with big guns and skimpy outfits adorned the covers to books chock full of statistics of tanks. Greg Porter decided he wanted to cash in on this by creating a puerile game about these cover gals. You played Macho Women, armed with guns and swords; who took on parodies of everything that was running around in gaming fiction at the time. Greg designed it in one afternoon and play tested it once. He made a bunch of copies and sold far more than he ever imagined. Now he works in computers where he designs beautiful complicated games. To most of us though he’s that genius who gave us rules for playing Bat-winged Bimbos and Renegade Nuns on motorcycles.

Now close to 20 years later, the D20 craze swept the gaming community. Every company and their brother were making role-playing books that you could play using a universal game mechanic. Mongoose Publishing got the rights to Macho Women and turned a delightful stupid game and transformed it into a dirtier, more stupid yet still fun game.

It’s also one of the few games out there that’s just as fun to flip through as it is to actually play. I still find pages that offend me even though I’ve had the game for a year. The breast size calculator is just WRONG.

Hope you find some silliness in your day.

9 Responses to “Half Nekked Thursday Silly”